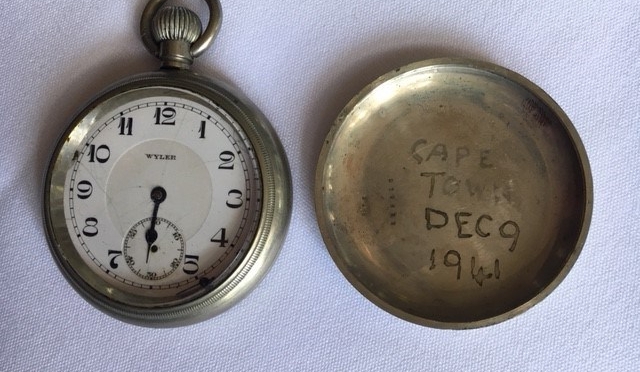 In our latest guest blog, Louise Reynolds talks to us about her new research project looking at how the experiences of captivity across the Far East has affected subsequent generations. If you would like to be involved with Louise’s project, her contact details at the end of this blog.

This precious pocket watch is one of the very few items that Bernard Stogden owns, which belonged to his father, Staff Sergeant Harry Stogden, RAOC. Harry was a FEPOW who tragically died in September 1945 on the boat on the way home. He had carefully etched the details into the cover of the watch: it was purchased in Cape Town in December 1941, just one month before the allies surrendered in Singapore. Bernard says:  “I wonder how he managed to hide it from the Japanese?”  Then he says:  “I was only 4 years old when he went to war. I have gone through life without a father. I missed him then and I still miss him now.”

As the child of a FEPOW myself (Padre Eric Cordingly) I feel there’s an area of our research which has been somewhat neglected, which is how the experiences of the FEPOWs impacted on their families: the wives, children and grandchildren, and how it still echoes down through the generations today.

Some, like Bernard, grew up without a father, and others had frightening and negative experiences because the men were so traumatised by what they’d been through.  Other families were inspired to find out more about their relative and undertake extensive research which has been of benefit to the whole FEPOW community.  Some had fathers who wrote diaries and a lucky few have discovered bagfuls of treasures which survived the war and were put away in cupboards to be found years later.

Jeremy Stacy’s father, Eric, was a chartered architect in civilian life and when he was a prisoner he helped to design some of the little chapels they built in Changi, Singapore, and up-country, beside the Thai-Burma Railway. He made some beautiful paintings of them, one of which Jeremy is holding in this photo: St George’s “in the Poultry”, close to the chicken runs in the officers’ area and within the Changi gaol walls.

That’s why I’m getting this project together. I feel it is helpful for us to recognise that, as children, we have all been affected in some way or another.  The men returned home and many were told to keep silent, or their stories were neglected or ignored. That’s why so many of us have struggled to share their histories with a wider audience.

I’m trying to document the various ways in which the impact of the FEPOWs’ experiences affected their families and to understand how difficult it can be for later generations. It’s not an academic study: it’s a chance for us to tell our stories.

I’ve already completed several interviews, and I’m looking for more.   If there is anyone who would like to talk about their father, grandfather, uncle or other relative, and how his experiences in the Far East affected them and their families, please do contact me.

I’m aiming to have all the research completed by Christmas 2018 so please get in touch as early as you can.  You can reach Louise directly at:  louisereynolds99@aol.com  or fill in the contact form and we would be happy to forward  your message to her.