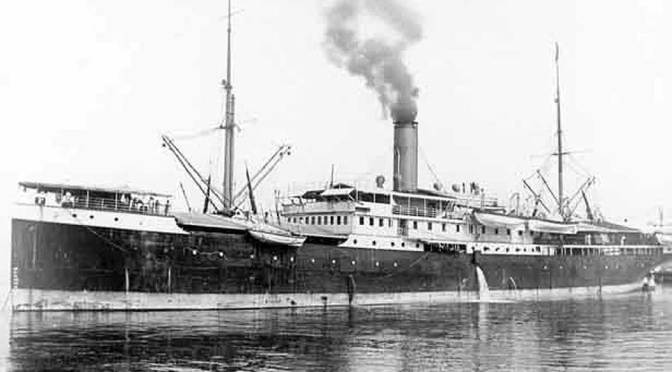 To mark its anniversary, Dr Lizzie Oliver writes about the first of two sinkings of POW transport ships en route to the Sumatra Railway…

Seventy-five years ago today, 26 June 1944, a large contingent of Allied prisoners of war who had been designated to work on the Sumatra Railway were shipwrecked following ‘friendly fire’ by the British submarine HMS Truculent.

At the time, the former S.S. Van Waerwijk – renamed the Harugiku Maru by the Japanese – was being used to transport supplies from one side of the island of Sumatra to the other. What those aboard HMS Truculent didn’t know at the time, was that the ‘supplies’ being transported also included 730 Allied prisoners of war crammed down into the hold.

‘They had approximately 2’6” by 5’6”…in which to sit or lie with such kit as they possessed. There were no port-holes open on either side…There was such a congestion that the last 50 prisoners were literally beaten in the holds with sticks’. [Captain James Gordon Gordon, Royal Artillery]

Conditions during the voyage were exceptionally difficult, with meagre food and the only breaks up on deck permitted after the ship had been sailing for at least 18 hours. After much remonstration with their guards, groups of 25 men were able to go up for some fresh air every 15 minutes.

At 2pm on the 26th, two torpedoes hit the side of the ship. She sank within minutes; 180 POWs were killed, along with half of the 50 Japanese also on board.

After several hours in the water, the POWs were picked up and taken to River Valley Road Camp in Singapore. Here they would stay for three weeks until they were transported straight back to Sumatra. This time, they would find their intended destination: the jungle camps and exhausting labour of railway construction.

‘We walked…with our few worldly possessions – a sack or haversack, with a spoon and a dish, water bottle, a photo or two to remind us of loved ones at home, a toothbrush and razor blade which lasted me for 3 ½ years… We were to build a railway line…and the technical staff who were to supervise its construction, had already built a similar one in the north. We knew nothing of the Burma-Thailand line, nor that this one would be 220 kilometres long, and cross over the equator. So we toiled from daylight…until after dark, seven days a week’. [Allan Angus Munro, RAF; IWM ]

To read more, the paperback edition of Prisoners of the Sumatra Railway is available now. You can order it with a 10% discount via Bloomsbury here: https://www.bloomsbury.com/uk/prisoners-of-the-sumatra-railway-9781350118904/