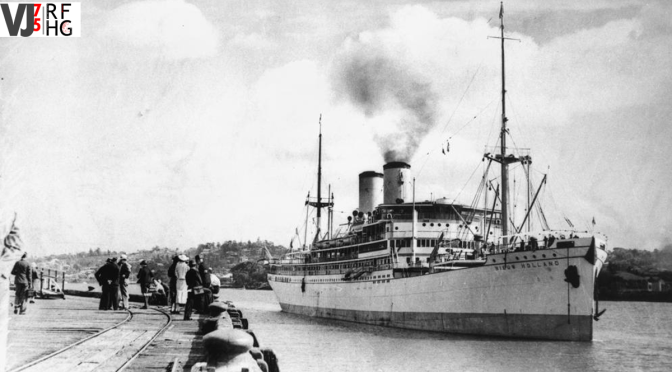 Interview with Dr. Bernice Archer and excerpt from her book (In the Shadow of the Rising Sun. Maruzen Asia 1983). Used with kind permission of Mary’s niece Margaret Thomas.

On the evening of 15th August 1945 an extraordinary rumour began to circulate in the camp. It concerned the collapse of Japan and some unheard-of catastrophe. We dared not trust the rumours, we had heard too many. However, the food fatigue brought our breakfast, not rice gruel this time but fried cakes of rice with a V for Victory stamped on each one… At the meeting in the afternoon we heard that Japan had actually surrendered and that there was a new weapon, the atom bomb, by which the surrender had been won. But inexpressibly relieved and delighted as we were to hear of victory at last, we could not help having a sense of awe and horror at the means of winning.

As the days went by our position remained ambiguous. The Japanese were obviously in an uncertain frame of mind but still in control of the camp.

We learned later that though Japan had capitulated General Itagaki, commanding in Malaya, had not decided whether to join in the surrender or to continue fighting on his own.

This continued for a fortnight. We only knew what his decision was when four British paratroops, Red Devils in berets and battledress suddenly appeared in camp.

The last ten days in the camp were so crowded with events and new sensations that they were almost exhausting. Visitors flocked into the camp. First there were POWs from Changi and other military camps. We had plenty of food chocolate distributed by the Red Cross and British sailors and bread baked by the cooks of H.M.S.Sussex and sent to the camp every day.

We had proper soap again, flannels, toothbrushes and combs. It was like recovering from an illness and having a perpetual Christmas party.

On the afternoon of 11 September we went to the Thanksgiving service at St Andrews Cathedral. That evening two friends and I had our first civilised meal for more than three and a half years, in the officers’ Mess of the Punjabi Regiment…. It was a wonderful evening partly from the sheer pleasure and excitement of actually dining out like civilised people again.

The evening after the surrender ceremony Lord Louis Mountbatten visited the camp to explain the difficulties which had delayed repatriation.

On Tuesday 18th September I left the camp with twenty – two other women and three children to go on board the Nieuw Holland. The journey home, our first real encounter with the outside word, was something which could never be forgotten.

We landed at Liverpool on 16th October in a fog

It took a long time after repatriation for a sort of amazement at people’s gentle manners and kindly ways to pass off. We marvelled at the way Britons had been hideously bombed and rationed and had borne for 6 exhausting years the burden of a tremendous war. We felt we had come back to a very wonderful nation.