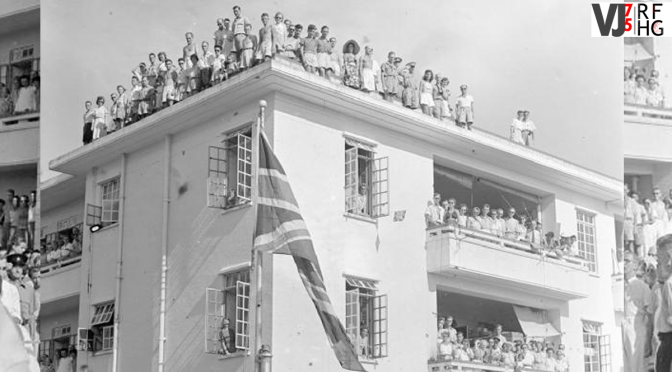 (Written by John Barton and copy given to Dr. Bernice Archer)

Rumours were rife…we lived in constant hope. On 15th August a Formosan guard told a group of us ‘war over’. We looked at him incredulously. The next day the colonial Secretary set up a table and stood on it and informed the internees that Japan had unconditionally surrendered to the Allies. Frenzied ecstasy is the only way I can describe the days that followed. Rations improved, the Japanese gave us buffalo meat and butter and chocolate, it was wonderful to have good nourishment again. Days later the American planes began dropping food.

On the horizon we could see signalling lights of the Royal Navy as they swept the approaches to H.K. (Hong Kong) for mines. One morning three weeks later HMAS Freemantle glided into the bay at Stanley and anchored some 500 yards away. I ran to the beach and was joined by a 12 year – old girl. Chinese sampan sculled us to the Freemantle where we were treated like royalty. We finally left the mine sweeper loaded with fruit and tinned food.

A few days later the British soldiers arrived in camp. We were impressed by their healthy-looking bodies, they in turn were amazed at the emaciated internees in their bedraggled shorts and no shoes or shirts.

In mid-September we were ferried to the SS Empress of Australia. Women and children were quartered in cabins, men and boys on the troop desks. When we arrived in Manila British POWs were mustered and ready to embark. We looked over and there was Bernie (Bernard their older brother was a member of the H.K. Volunteer Defence Corps) waiting to board. He had survived!! We were all overjoyed.

I had entered the camp aged 12 and left aged 16 and at that age it seemed like a lifetime.