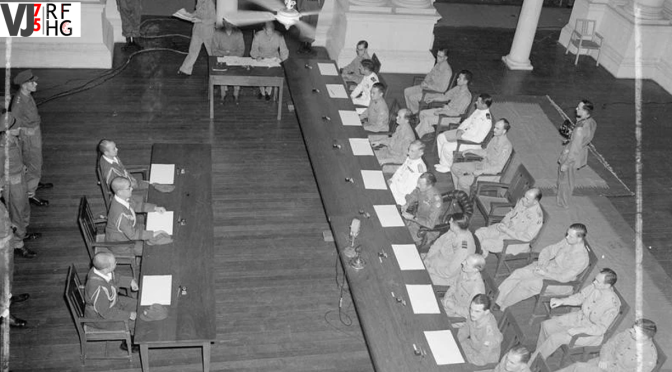 The Japanese unilateral cease fire on 15 august caught the South East Asia Command (SEAC) unprepared. The next day President Truman issued “General Order Number 1’ setting out the immediate aims for the allies. General MacArthur,  who had been appointed as Supreme Commander Allies Pacific (SCAP) issued an order that no allied units may move into Japanese held territories or engage in conferences with the Japanese until after the formal surrender, which was expected to be signed on 28 August (subsequently became 2 September). Despite these orders Mountbatten commanded his counterpart, Field Marshal Terauchi (also a cousin to his sovereign) of Southern Command, to send a delegation to Rangoon to sign a preliminary agreement before the Tokyo surrender.

The delegation arrived on 26 August and it immediately became clear the Japanese would agree to any proposal. They revealed that Tokyo had ordered Southern Command to care for the PoW and assist the British in any way in this regard. Unprepared for this degree of cooperation the British delegation asked Mountbatten for instructions. The second item concerned the acceptance of relief teams in the PoW camps. Eventually the Rangoon Agreement would contain 11 articles concerning the PoW.[1]

The British spied on the envoys; so they knew from an intercepted message (26 August) that the envoys sent instructions regarding the PoW to their HQ, including the advice that the air supply of the camps might commence on 26 August. Indeed, the degree of trust was so great that Mountbatten ordered the existence of the Force 136 units in Thailand to be revealed.[2]

To his commanders Mountbatten wrote that the Rangoon ‘document was in effect but not in name an instrument of surrender covering SEAC area. Although to comply with instructions I received from SCAP not to sign any surrender papers before the Tokyo event, the document has been called a local agreement.’

[1] 1. Disclose location of all camps

2. Provide numbers, nationalities and sex of all PoW and CI in the camps

3.Withdraw guards and hand over control to senior Allied officer in the camp

4. Provide (armed) parties or arms to the camps. Armed parties under control senior Allied officer in the camp.

5.Be personally responsible for safety of all PoW (despite the senior Allied officer)

6. Remain personally responsible for provision of food, clothing and medicine

8. Provide numbers, nationalities and sex of all PoW and CI outside the camps, in their area, and remain responsible for them

9. Disclose airfields close to the camps

10. Ensure all records are handed over intact

11. Notify the senior Allied officer in the camp of the Japanese surrender

[2] Apparently General Slim (ALFSEA) feared for their safety; so SACSEA ordered the Japanese be told the untruth that the Force 136 agents had parachuted recently with the sole purpose of RAPWI.