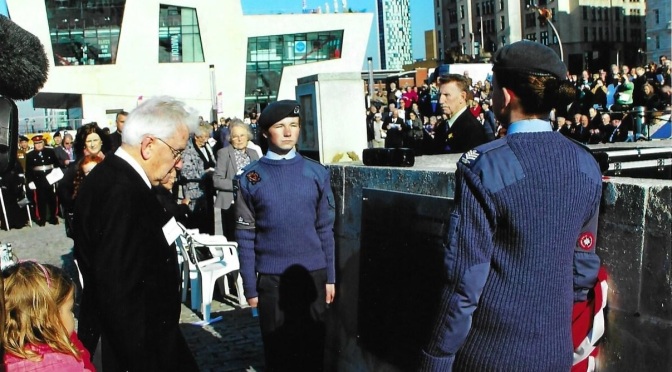 On this day in 2011, the Repatriation Memorial was unveiled in a service led by Rector of Liverpool, Rev Steve Brookes. The ceremony on the pier head was attended by 650 people who watched as the granite plaque, engraved with the names of the repatiration ships that docked at Liverpool and dedicated to 20,000 British servicemen and 1,000 civilians who were aboard them, was revealed.

One such serviceman, Maurice Naylor CBE, a former FEPOW and Gunner in the 135th Field Regiment, Royal Artillery, who himself returned to Liverpool after survivng the camps aboard the SS Orduna, unveiled the plaque as part of the ceremony.

The memorial was funded through a national fundraising campaign, led by RFHG, that raised £8000 and remembers those that managed to make it home. It is the first of two such memorials (the second is in Southampton and was unveiled in 2013) marking the repatriation of Far East captives. Each lists the names of the repatriation ships that arrived between 7 October and mid-December 1945, either side of a dedication to the memory of all those held in Far East captivity.

You can read more about the ceremony, including quotes from Maurice, here.

An interview with former FEPOW Bert Warne was recently featured on ITV. Although the placque shown is the Southampton FEPOW Merorial, Bert’s ship did dock at Liverpool. You can read more about Bert, and watch his interview, here.