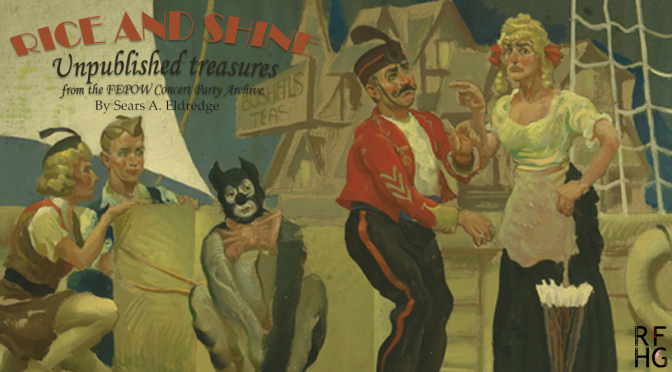 At first, it had been easy to move from one area of Changi to another without interference as there were no I. J. A. guards on patrol inside the camp or barriers set up between the different Areas, but on 6 March the Japanese, concerned about this easy intercourse among the military units, issued two orders to gain some control over this situation. One was that a daily Roll Call would now be conducted in each Area. The other, was, to say the least, extraordinary: each Area was to wire itself in. Work commenced on 7 March and was completed on the 13th. Japanese guards now manned checkpoints between the camps. Movement from one area to another was still possible, but strictly controlled. For an individual, approval had to be sought first, and then an officer carrying a “flag”—a white piece of cloth with Japanese characters on it—had to accompany the person. At some checkpoints, an officer with a flag walked back and forth providing “ferry services.”[i]

Note that all the documents in this series of blogs reside in Sears A. Eldredge Archive in the De Witt Wallace Library at Macalester College, 1600 Grand Avenue, St. Paul, Minnesota, 55105

Sear’s book, Captive Audiences/Captive Performers: Music and Theatre as Strategies for Survival on the Thailand-Burma Railway 1942-1945, was published by Macalester College in St. Paul, Minnesota in 2014, as an open-access e-book and is available here: http://digitalcommons.macalester.edu/thdabooks/22