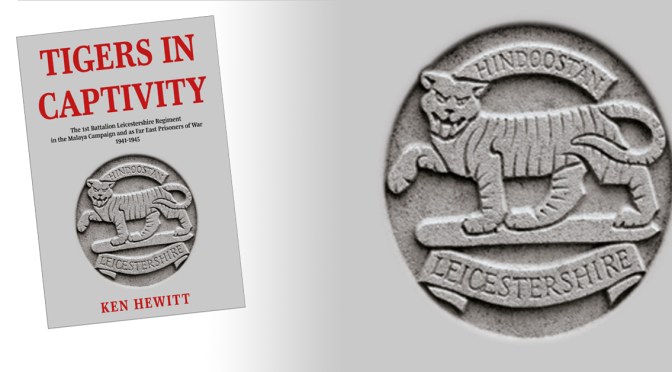 The 1st Battalion Leicestershire Regiment in the Malaya Campaign and as Far East Prisoners of War 1941-1945.

Ken’s research into his father’s military career with the Leicestershire Regiment started in 2006 and quickly led to an interest in all 936 men of the 1st Battalion who fought in the Malaya Campaign, many of whom became Far East prisoners of war under the Japanese.

In 2015, to commemorate VJ70, he presented his research findings to an audience of 100 FEPOWs, descendants, Regimental veterans and other interested parties. Following the talk, he was strongly encouraged to document his findings more formally and now, seven years later after further research, writing and re-writing, sorting of photographs and creation of charts and maps, his book, Tigers in Captivity, is finally published.

The book starts with the Battalion’s move from India to Malaya in early 1941 and continues with the defensive actions and withdrawal, from Jitra in the north to Singapore in the south over a 55-day period following the Japanese invasion of Malaya in December 1941. It describes the early encounters with the enemy, the chaotic withdrawal from Jitra and the amalgamation with the 2nd Battalion East Surrey Regiment to form the British Battalion.  The subsequent defensive actions of the British Battalion at Kampar, Batang Berjuntai and Batu Pahat and on Singapore Island are all addressed. It continues with the eventual surrender of Singapore, the so called “Impregnable Fortress”. Those who are known to have escaped the island around this time are identified and, where known, their ultimate fate recorded.

Nearly 700 men of the battalion were now prisoners of war and Tigers in Captivity goes on to describe the movements of the captives around the Far East – the work parties in Singapore, the transfers of men to Japan and other Far East countries and the exodus to Thailand to build the infamous death railway. Even after the railway was completed the horrors continued with malnutrition, illness and disease, hard labour, brutality and ‘hellship’ transfers to Japan. Liberation finally arrived in August 1945 and the book addresses the repatriation of these now ex-POWs and the post war situation in which they found themselves.

Every man who was killed in action, or who died as a prisoner of war, is remembered by name at the appropriate point in the text and specific information on the circumstances of his death and grave location is given.

Summary Charts present the statistics of the Malaya Campaign and the subsequent captivity. Movement Tables list the men in each of the POW movement parties and an A-Z listing of all 936 men summarises their fate and movements during this period. An extensive bibliography lists the sources of information and provides readers with a signpost to further relevant reading.

The main purpose of the book is to enable descendants of these men to develop a better understanding of the Malaya Campaign and the period of captivity which their relative experienced. Not only is Tigers in Captivity the definitive historical record of the 1st Battalion Leicestershire Regiment during this period, it provides a tangible ‘family’ memorial not only to the men who died at the time but also to those who survived and are no longer with us.

We will remember them.

Copies of the book are available at a cost of  £25 + postage and packaging directly from the author, Ken Hewitt at kenhewitt@ntlworld.com   or the publisher at www.troubador.co.uk/bookshop