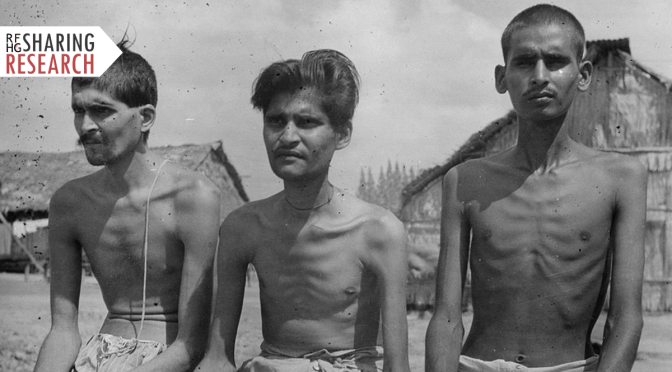 Two years ago I wrote a blog post outlining my research project on Indian PoWs. Since then, I was lucky enough to complete my research in India and elsewhere before the Covid-19 pandemic closed the archives, and I have now begun writing my thesis. One of the reports I found in India detailed the work of Lieutenant Colonel Malhotra of the Indian Medical Service (IMS), who played a pivotal role in providing medical services to Indian PoWs in Singapore and the surrounding region.

Among the 67,000 Indian troops captured by the Japanese were thousands of IMS personnel, including 180 officers. Singapore became a major hub for medical provision to Indian PoWs, with the whole operation being commanded by Malhotra. At one point in 1944 he had direct command of a hospital in Singapore with 4500 patients and staff, although there was also a second hospital with another 2500. While most Indian patients only remained in hospital for a limited period, there was a core of around 500 permanent invalids, most of whom were battle casualties from the Malayan campaign.

Malhotra and his men faced three broad challenges: dealing with the Japanese; obtaining sufficient medical supplies; and providing food for the patients. In terms of the Japanese, a constant feature was the poor treatment of his staff, with Malhotra stating that they ‘suffered both mental and physical torture’. In addition, decisions made by the Japanese, for example to amalgamate three Indian hospitals into two in 1944, often caused unnecessary hardship.

Unsurprisingly, obtaining medical supplies was a major challenge, particularly given the large numbers of patients being cared for. There were however two significant deliveries of supplies: one in January 1943 consisting of fifteen lorry loads of medicines and dressings, and another smaller one in May 1945. Even so, there were acute shortages of medicine at times (for example in 1944), despite attempts to find substitute drugs locally.

Obtaining enough food for the patients was another major concern. Although the Japanese provided subsistence rations for patients, they were inadequate to assist with recovery. Malhotra oversaw the establishment of duck farms to provide eggs for the patients, although the farms were closed due to Japanese policy in late 1943, an outcome he viewed as a major setback. Rations deteriorated to the point where there was an outbreak of Beriberi among patients in 1944, although improvements in rations overcame this by the end of the year.

While the challenges were many, it is clear that Lieutenant Colonel Malhotra and his staff saved the lives of many Indian prisoners during the years of captivity. In recognition of his service he was awarded the Order of the British Empire after the war, but despite this, the story of the IMS in Singapore has been largely forgotten.

Please get in contact if you have any information of Indian PoWs of the Japanese.