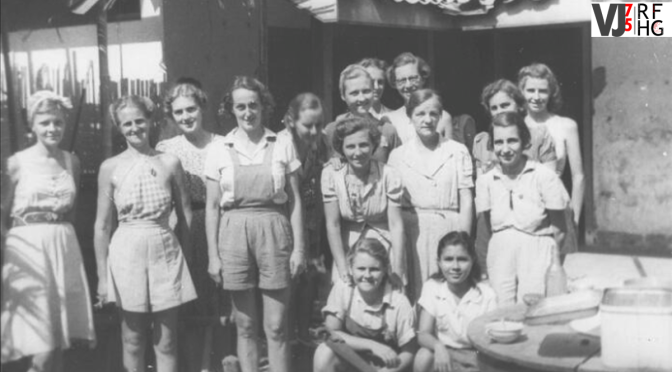 Paula Kogel a young German woman married to a Dutch man and interned with her two young sons in Tjideng, Batavia (now Jakarta)

From ‘The House at Ampasiet’ (British publication by Matador). Used with kind permission from Lore Ridings, Paula’s daughter.

August 1945: One day (no date given) at around ten in the morning we were summoned to roll call on the main square….A Japanese officer stood on a small stage so that he could oversee us all and we were forced to look at him…There was no longer an aura of power emanating from him, more loss of spirit,… finally he started to talk. It was clear he found it difficult.

“Ladies, we have to tell you that Nippon has been forced to capitulate. The capitulation came after a new type of bomb was dropped on my country which has resulted in hundreds of thousands of victims. You are now free.”

We stood there a crowd of shabby looking women and children…We stayed silent. Nobody cheered, nobody moved. The terrible second world war had ended – but nobody had a Dutch flag. And nobody celebrated the liberation.

Life slowly came towards us, to greet us with a smile.