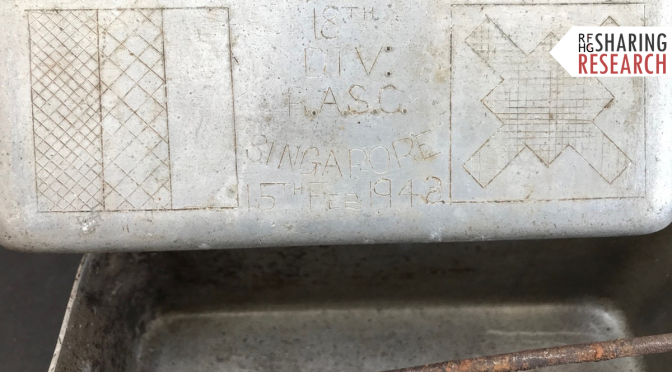 Whilst searching for an enamel mug on eBay, I happened across a group of items that appeared to belong to a FEPOW veteran. I searched the name and confirmed they did indeed belong to a FEPOW. Although not something I would normally be looking to buy, I purchased the items in order to keep them together as I feared the group being split up as, sadly, this does happen from time to time with military groups. I contacted the seller who was not related to the original owner but had purchased the items from a general auction.

I have a good knowledge of WW2 and, in particular military artefacts, but my wife is more knowledgeable than myself on the Far East campaign and POW’s experiences having had two great uncles that served in the Far East. One served in the Royal Marines 44 Commando, the other was Raymond John Marks (Royal Engineers), who sadly died whilst in captivity after the fall of Singapore. I have some experience researching the service of other family members and soldiers from different periods in history, so I helped research the history of my wife’s great uncle’s service.

These items belonged to Lt. John Fredrick Wright, the son of a Royal Navy Surgeon Captain; he was born in August 1919, and with the outbreak of War in 1939, he was a student living with his parents in Bournemouth. His POW report card has his occupation as an automobile engineering trainee. In 1940 he was commissioned and joined the Royal Army Service Corps attached to 196 Field Ambulance Royal Army Medical Corps; the RASC provided drivers for their ambulances. Lt. Wright travelled to Singapore with 196 FA part of 18th Division and was there during the fall of Singapore. I have managed to download several documents pertaining to his service; these include his captivity report, his record card and a number of camp rosters where he is listed. I have recently begun looking into the camps listed on his captivity report. Other than those, I currently have no further knowledge of his time in captivity or his life after WW2. I am still researching him, so I would be interested to hear from anyone who can provide any further information about him. It would be particularly special to be able to add a photo of him to the collection.

The group of items, pictured below, consists of:

There are two clothing items: his “Jap Happy” loincloth and non-issue handmade shorts, possibly camp made.

The following few items may indicate a medical link, firstly a set of unidentified kidney-shaped tins use unknown. The smaller section is able to sit on the edge of the main tin. Nearly all British army items are usually marked; however, these are not.

Next, there is an ivory tongue depressor, and finally, a piece of bamboo of unknown purpose that has been hollowed out at one end, creating a vessel for maybe a medicine or ointment. It has a staple in the bottom, perhaps to enable it to be hung up. Any suggestions as to its use would be appreciated. Given that these items are included, I think that Lt. Wright served in some sort of medical capacity. Although he was not RAMC, he was attached to them, and with his father being a Surgeon Captain RN, he may have had some basic knowledge or just willing to serve as an orderly.

These items no doubt meant a lot to Lt. Wright as they were his worldly possessions for a number of years. Understandably many would be only too happy to part with any reminders of their time in captivity. For some, it might not have been easy to part with items that were so important to them after many years in captivity. He kept that simple, inconspicuous piece of bamboo, and the mug is still stained from use as is the clothing, one mess tin retains the burn marks of use, and the web material of packs holds dust from the Far East. Untouched, they tell the story of their use. They have not been cleaned, washed, or polished bright in later years; they look to have been brought home and just put away. Perhaps a reminder that he did not want to part with, but equally just wanted to put away.

Handling these historic items is a tangible link not just to Lt. J.F. Wright, but also Raymond John Marks and every other Far East Prisoner of War. I plan to donate the items to somewhere they can be preserved for the future and commemorate Lt Wright’s service.

Thank you to Meg Parkes for suggesting this post and identifying the loincloth, also thanks to Emily Sharp for help with this post and translating the report card.