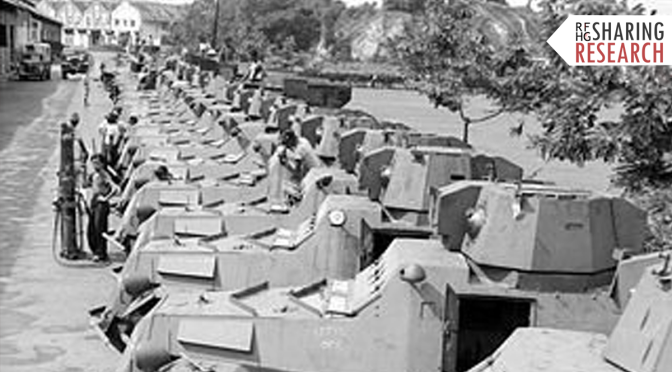 It is often cited by historians that the British had no tanks in Malaya.

This is not to say that the Allies had no armoured vehicles, however. Notably the Argyll & Sutherland Highlanders were provided with 6 Lanchester armoured cars, each to be named after Scottish castles. These vehicles had been brought over from the Middle East and were notoriously temperamental.

Captain Wilson of the A&SH describes them as:

‘By anyone’s standards the Lanchesters were well past their sell-by date. They were designed for the Middle East and from their log books all had served there; they were well old, cumbersome and crotchety, but they packed considerable firepower (a .5 and .303 medium machine guns in the turret and another .303 machine gun in the hull) and they had a tolerably thick coating of armour for their day.’[1]

Vehicles loaned out to other units were returned as their new operators were unable to get them started. The Scots made good use of the five Lanchesters they took into Malaya however only one, the ‘Stirling Castle’ made it back to guard the causeway as the last of the allied troops crossed into Singapore. The last of the Scottish Lanchesters were knocked long the Bukit Timah Road during the fight for the Dairy Farm

The A&SH and the SSVC were also given Marmon Herrington armoured cars. But these lacked armoured protection, firepower and were open topped allowing the enemy to lob grenades and Molotov cocktails into the crew positions with devastating effect.

In July 1942 Lieut. R L Rendle of the FMSFV Intelligence branch wrote a ‘secret’ report on the action of the F.M.S.V.F armoured cars units in Malaya from the 6 – 15th February 1942. He states that the armoured cars were prone to ambush, a skill quickly developed by the Japanese. He does note however that early in the campaign the armoured cars were effective against what he considered ‘irregular’ Japanese troops who were untrained and unequipped to attack armoured vehicles and suffered heavy casualties for their efforts. Notably he reports that second-hand accounts were telling of Japanese troops attacking with magnetised mines and bottle bombs of Nitric Acid in almost suicidal assaults on the armoured cars.

There was one additional problem though in the Herrington steering position. The small view port used by the driver to see behind the vehicle when they were reversing was set too high up to be any use. The driver depended on another crew member to say what was behind them. When reversing out of an ambush all the crew were too busy to keep a look out and many Herringtons ended up driving into the drainage ditch by the side of the road forcing the crew to abandon the vehicle. Simple design faults that ultimately cost lives.